Creativity Off the Page

Not surprisingly, my favorite creative outlet is writing. That being said, sometimes - particularly during the story drafting process when all my ideas are at best tangential to anything making sense - I need to take a step back from the notebook. I can not, however, just do nothing. Something about an object at rest staying in rest. Every moment I spend sitting on the couch staring at the wall breeds yet another similar moment.

So, I've found some other things I enjoy doing that keep me busy, but still leave part of my brain free for idea finessing. Here are my top five non-writing-related creative outlets: 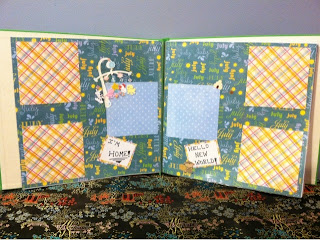 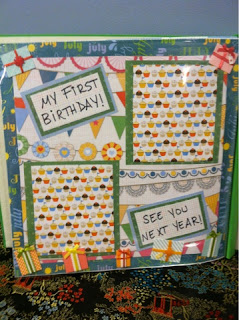 I love photos and despite the ease of storing all of them digitally, sometimes I want to have some hard copies. I figure rather than just sticking them in a box, I might as well have some fun in displaying them. 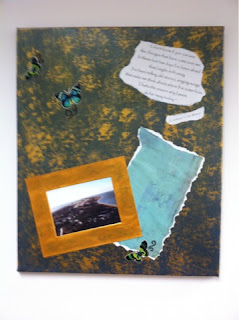 As my painting skills are not exemplary, I basically use these as hang-able scrapbook pages. Plus, living in an apartment with all white walls, splashes of color are always welcome. 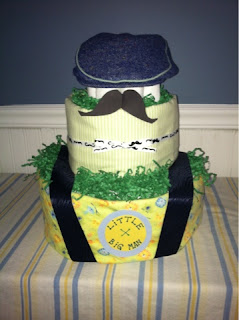 There have been an influx of tiny humans in my life over this past year. And in preparation for their arrivals, I've attended a number of baby showers. I had never heard of a diaper cake before this year, but have found that they are a lot of fun to make. Plus, the rolling of diapers is the perfect mundane activity to keep my hands busy, but my mind moving. I've had a number of story epiphany moments while working on these bad boys.

Sorry folks, no pictures included here. Even when what I'm experimenting with turns out well, never in my life have I been able to get a flattering photo of it. Suffice it to say that right now I'm very into pies - specifically peach berry.

Whether it's birthday parties or baby showers or really bad movie nights, I love planning parties. Mostly because it's like envisioning a scene for a story and then making it happen. Have the possibility of a bigger event percolating in the old brain pan right now. I'll let you know if it comes to fruition.

In the meantime, what are your creative outlets?
Posted by Unknown at 3:07 PM 3 comments:

For The Benefit of Future Generations

So, I've been going through some things from my childhood. Cleaning out the old homestead. Because, there comes a time in every lady's life where she has to decide if she really needs to hold on to those root beer bottle caps from '96. Not that I'm not sure the beverages in question were delicious.  I mean, seriously, it's root beer. What could go wrong? But is it necessary for me to commemorate my drinking it? That's the question.

And the answer is, probably not....but maybe....hold strong, Johnson, hold strong....No. The answer is no. I don't need that.


Of course, there have been a few gems that will be truly hard to part with. For instance, this notebook from the late '90s:

I know what you're thinking, Of course, you can't throw out such a bitchin' ice cream cone notebook! And you're not wrong, but this little pad is so much more than that. It is a detailed, if poorly spelled, record of information vital to the survival of human culture.

Simple and to the point. Perfect for passing
information along to future generations.

Hopefully those future generations won't be so
dependent on spell-check that this mistake
makes the record indecipherable.

"Scruffy looking nerf herder" would have also
been acceptable.

I believe the descriptor here was meant to be
"Crafty." Unless "Crafy" is Bespin slang.

Listing a Wookie's age seems more likely to
make him angry than the whole beating
him at chess thing.

He's a simpler fellow than that C-3PO guy.

Wow, Past Kelly, a "Spoiler Alert" would have
been nice.

Both objectivity and spelling took a bit of
a hit here.

It just seems like there may be more dashes
here than absolutely necessary.

Just for clarification purposes, Yoda's species
has always been listed as "unknown."
Don't know what this "Green Dwarf"
business is about.

Apparently the rage over these "jerks" manifests
in the devolution of spelling.

Nope, sorry. Scratch that last observation. Friend
or foe, spelling is clearly not a priority.

With the wisdom that comes with age, I can now
admit that perhaps Mr. Fett's story was a bit
less black and white than I originally thought.
As such, "jerk" might be a little bit strong.

That this descriptor was thought to be necessary
seems a bit speciesist. Just saying.

If you're wondering when Wedge got this mispelled
promotion (which you're not), Past Kelly was
just giving you a little taste of what the
extended universe has to offer.

Hence the inclusion of this one character who
appears only in the books.

The final proof that these insane ramblings were
not ultimately meant for me, but rather for some
studier of maniacal tendencies. Unless I thought
there was a chance I might forget I was indeed
female. Because the whole Star Wars thing
was clearly going to stick.

It just seemed wrong not to share these with you all. Where exactly would the justice be if you were not all informed of the kind of person you're cyber-hanging out with?

Also, if the anthropologist for whom I wrote this is out there and has been wondering why it's taken so long for these observations to see the light of day, I apologize deeply for the delay. Please let me know if you need further clarification on the aforementioned observations.

I will await your response.
Posted by Unknown at 12:42 PM No comments: