So, I totally know what you've been thinking lately.

Man, John Travolta and Olivia Newton John are fresh! But there are only so many times I can watch Grease. It would be wicked if they'd done something else together.


It's like I read your minds, right? No, I'm not psychic, this is just what everyone thinks. Trust me.

So, first things first, there is no such thing as watching Grease too many times. No. Such. Thing.

But, I can still help you out.

Join me in the viewing of the 1983 cinematic classic Two of a Kind*, starring none other than Mr. Travolta and Ms. Newton John. And, of course, Gene Hackman as the voice of God. Complete with edible sunglasses, bank robberies, a pair of the goofiest gangsters I've ever seen, and enough time freezes to make Zack Morris jealous, this is a film that is sure to make you sit up, take notice, and think, Well....that was certainly a movie.

No, this sadly isn't a musical. But, with the soundtrack being made up almost entirely of Olivia Newton John songs, sometimes you'll think maybe it is.

In keeping with the righteous time frame of the movie, the theme of the night will be the '80s. Appropriate threads are highly encouraged. If you choose not to partake, you will totally be labeled grody to the max. Just fair warning.

*Not to be confused with the Olsen twins' late '90s TV show of the same name. The one thing this movie is sadly missing is the hijinks of Mary-Kate and Ashley swapping identities.

Crackerjack dialogue to look forward to:

For a Two of a Kind '80s Celebration of your very own, here's what you'll need:

-          Two of A Kind (1983)
-          Spectacularly ‘80s outfit - think neon, acid-washed, cropped sweatshirts, parachute pants. Thankfully, all of the preceding suggestions work for men and women. Thank you ‘80s for the gender neutrality of your bizarre stylings!
-          Snacks - You can go the candy route with some Razzles and Pop Rocks. Or maybe you just want to make something that looks ‘80s-tastic. I favor the neon cake. 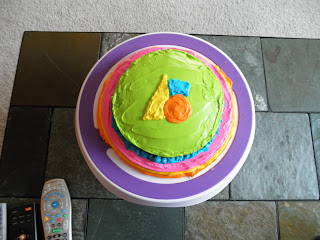 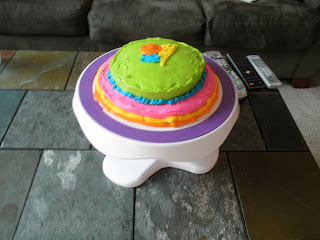 -          Decorations – Throw a Slinky on the end table, one of the Cabbage Patch Kids and a Glow Worm on the couch. Put a couple of photos of your favorite stars up on the wall. Or more than a couple….I certainly won’t judge. 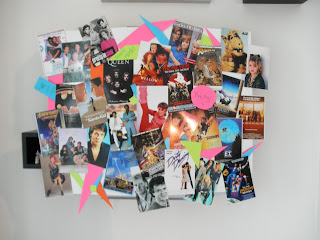 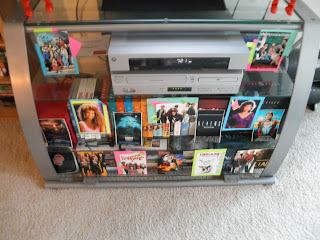 Add a few glow sticks and some gold lamé folderol? You’re good to go.
-     A bitchin' sign of slang phrases from the chose decade. Just in case, for some bizarre reason, your guests can't remember. (Gag me with a spoon, right?)
-    A group of retro enthusiasts and/or Rubik's cube champions and/or individuals who can do the dance from Saturday Night Fever whilst singing "Let's Get Physical" and not miss a beat.

Now, I've gotta book, but I hope you have a totally awesome weekend!
Posted by Unknown at 9:02 AM